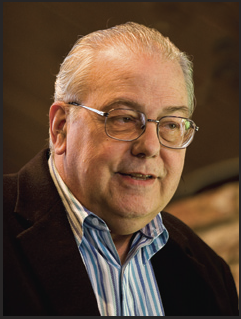 Dr. David Morrison is senior scientist at the NASA Astrobiology Institute and a founder of the multidisciplinary field of astrobiology. He is an expert on the risk of asteroid impacts and potential ways to mitigate that risk.

NASA Tech Briefs: What is astrobiology?

Dr. David Morrison: Astrobiology is the study of the living universe. It's very broadly based. It involves understanding the origin, evolution, distribution, and future of life in the universe.

NTB: You have to be an expert in a lot of areas to cover all of that territory, don't you?

Dr. Morrison: You have to have friends who are experts that you can talk to. Astrobiology is inherently a multi-disciplinary field, which means that we do try to bring the perspectives of different scientists into addressing the same problems, hoping that we'll get answers that are more than just the sum of the individual parts.

NTB: How does one go from being an astrobiologist to becoming an expert on the potential hazards of asteroid impacts?

Dr. Morrison: Asteroid impacts and astrobiology are related in terms of the history of Earth, because impacts, after all, have been an important driver for evolution, at least in the well-documented case of the impact that did in the dinosaurs 65 million years ago. So there is a connection; however, I wouldn't want to stretch that too far. Worrying about the impact hazard today is only loosely related to astrobiology.

NTB: You just mentioned the dinosaurs. While testifying before congress in 2002, you stated, "The impact of an asteroid about 10 miles in diameter 65 million years ago not only ended the existence of the dinosaurs, it wiped out 99-percent of all life on Earth." Recently there's been much debate within the scientific community about whether it was, in fact, an asteroid that killed off the dinosaurs. Are you still convinced that it was an asteroid?

Dr. Morrison: Yes, certainly. I question your statement that there's been much debate recently within the scientific community. There has been publicity given by journalists to a tiny minority – a fringe group basically – who seem to be holding out against this, and that's to be expected. In science it's rare that everybody gets on board when there is a real revolution in our perspective. But there is not a serious debate within the scientific community about the impact origin of the end-Cretaceous mass extinction

NTB: Can you elaborate on the evidence that exists that it was an asteroid that killed off the dinosaurs?

Dr. Morrison: The evidence is overwhelming that an impact was the cause, but we don't know if it was a comet or an asteroid.

First, there was a mass extinction, indicating a sudden, catastrophic change in the climate of the earth. The paleontological evidence shows that it was quicker than one can resolve by looking at the geological data. Whether that means the extinction took place in a hundred-thousand years, ten-thousand years, or an afternoon is not clear, but it certainly took place in much less than a million years.

Second, we know there was a very large impact at that time because we have the crater – the Chixulub Crater in the Yucatan – which is well-documented. And more to the point, we have the ejecta that was dug out by that crater and distributed over the whole world. It's a layer that is global in extent, and which contains the key chemical signatures of extraterrestrial material, as well as minerals generated by the shock of a violent explosion. That's how we know it was something coming from the outside and not something volcanic, for instance.

NTB: I understand you have an asteroid named in your honor. How did that come about?

Dr. Morrison: Lots of scientists have asteroids named in their honor, believe it or not, because we've discovered so many asteroids. Unlike most discoveries in astronomy, the discoverer gets to name the asteroid. So some people who have made lots of discoveries have had an opportunity to name some of these for their scientific colleagues.

NTB: There was a 1-in-75 chance this year that a 164-foot long asteroid called 2007WD5, traveling at 30,000 miles per hour, could have plowed into the planet Mars. Had that actually occurred, what would've happened?

Dr. Morrison: That impact probability, at one point, was as high as 4 percent. 1-in-25. The probability, of course, is an expression of our uncertainty about the orbit. It's not as though the orbit itself is flopping around; it's just the degree to which we understand it. It's only in Hollywood that asteroids capriciously change orbit.

If this asteroid had hit Mars, it would have had about the same energy as the Siberian Tunguska impact on Earth in 1908. But since Mars has a much thinner atmosphere, this one would've plunged right into the surface and made a crater, a crater roughly the size of Meteor Crater in Arizona, which is a little less than a mile across. For Mars scientists that would've been a tremendously exciting opportunity, because so many of the questions that we ask about Mars require us to understand what is below the surface. We think about building drills to reach the subsurface, but it's very difficult to do. Here we had the possibility that nature would excavate a hole for us and we could have looked at what was inside, looked at the ejecta, and perhaps seen a water lake form on the bottom of the crater. It would've been a unique opportunity.

NTB: Would that collision have had any effect on the planet Earth?

Dr. Morrison: No. The collisions that we think about – even something as big as the one 65 million years ago – are miniscule compared to the geology and astronomy of the planets. They have no effect on orbit, on spin, on axis tilt, on magnetic field, or anything else. A little one, like this one that might have hit Mars, wouldn't even have an effect on the planet beyond a few tens-of-miles from the impact.

NTB: Scientists are currently studying a 300-meter diameter asteroid, called Apophis, that will pass within a few thousand kilometers of Earth on April 13, 2029, and could theoretically, depending on its trajectory, collide with the Earth on April 13, 2036. Is this something we should be seriously concerned about?

Dr. Morrison: We should seriously be concerned about the long-term risk from asteroid impact. Apophis is the example that we have in front of us now. It is not posing any danger on the close flyby on April 13, 2029, and there is only a very, very small chance that, subsequent to that flyby, it will find itself in another orbit, which brings it right back to hit the Earth seven years later. That is a chance that is not zero, and it is worth considering seriously. But it's not an imminent threat. We are more at risk today from the objects we have not discovered than from the objects we have found that come very close to the Earth.

NTB: If such a collision did occur, what would be the consequences for life on Earth?

Dr. Morrison: Apophis is about 300 meters in diameter. That is below the threshold, we think, for a global disaster. That is, the problem would be confined near the area of impact and it wouldn't plunge the whole Earth into some sort of impact winter as it's sometimes called.

However, if you were anywhere within hundreds of miles of the impact point, you would have a very bad day. It would dig a hole several miles in diameter, and throw ejecta, and create hurricane-force winds and earthquakes… It would be enough to pretty much wipe out a small country or a small U.S. state.

NTB: In 1992 you were heavily involved in a project initiated by congress called the Spaceguard Survey. Tell us about that project.

Dr. Morrison: Our nation's response to the impact hazard has been focused on the Spaceguard Survey, which was urged by congress and was adopted formally by NASA in 1998. It is a telescopic survey to find the majority – the goal is 90 percent – of the near-earth asteroids one kilometer or larger in diameter, because that is the size-range at which you risk a global climate consequence if one hits. So these are the most dangerous asteroids, and fortunately, since they're moderately large, they are also the easiest for astronomers to find.

NTB: Suppose, just for the sake of argument, we discover that an asteroid is on track to collide with the Earth. Do we have the technology to prevent that from happening?

Dr. Morrison: Asteroid collisions are the only major natural hazard that we can imagine completely negating. You couldn't stop an earthquake from happening. You can't stop a volcano from erupting. But in principle, at least, we could stop an asteroid from hitting us. The primary issue is the amount of warning time. The mantra for Spaceguard is "Find them early, and find them early, and then make sure you find them early."

Given several decades of warning, I have no doubt that we have the space technology and could develop the specific techniques to deflect an asteroid. But given only a few years of warning, we do not have the technology. The best we could do, which would still be important, would be to evacuate the area where the impact was going to take place.

NTB: And we can accurately predict where that will happen with current technology?

Dr. Morrison: When you find one of these objects, initially the orbit is quite uncertain. As time goes on and you do more observations from optical telescopes, and especially from radar telescopes like Arecibo, you refine the orbit and find the probability of an impact. If that probability keeps getting higher as the observations get better, you begin to be concerned. As to pinpointing the actual spot where it would hit, you might have only a few weeks warning at that level.

NTB: Does the technology you're working on now to assess the hazards of asteroid impacts have any other potential commercial applications for the future?

Dr. Morrison: If we ever develop a robust infrastructure in space with lots of spaceships going back and forth and humans on the Moon and Mars, then there will be a very great need for space resources. Asteroids are the best potential sources of resources. In particular, a lot of asteroids contain water, which is just what you need – as water, as oxygen, as hydrogen – to support humans, to provide fuel for spacecraft. So understanding the asteroids, even learning to move them around, may ultimately be a key to developing a self-sustaining infrastructure in space.

But we aren't there yet. The immediate issue is whether we can protect ourselves from asteroids. The long-term issue is learning to use this knowledge to provide raw materials to develop a space economy.

For more information, contact Dr. David Morrison at This email address is being protected from spambots. You need JavaScript enabled to view it..

Smallest Motor in the World

Answering Your Questions: Will the 2020 Mars Rover Have Back-Up Features?

The Path to High-Level Autonomy for Commercial Vehicles