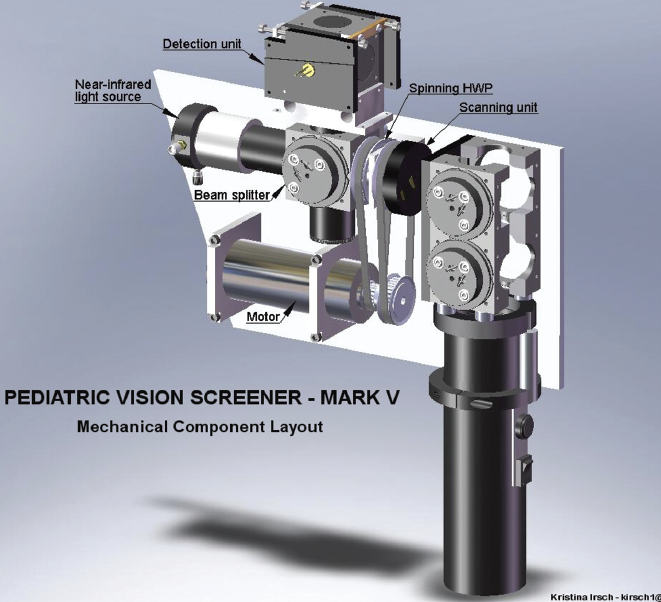 (Winner of an HP Workstation)

Amblyopia, commonly known as “lazy eye,” is the leading cause of vision loss in childhood, caused by misalignment of the eyes (strabismus) or defocus. If treated early in life, especially during infancy, there is an excellent response to therapy. A reliable and effective screening technique that can easily be administered by lay personnel is needed.

The Pediatric Vision Screener (PVS) can simultaneously detect proper alignment as well as proper focus of infants’ eyes. The latter is determined by measuring the size of the double- pass blur image produced from a point source of light. Eye alignment is assessed by means of binocular retinal birefringence scanning (RBS), in which polarized near-infrared light is directed in an annular scan on the retina, whose nerve fibers are birefringent, and the polarization-related changes in light retro-reflected from the ocular fundus are analyzed. Due to the radial arrangement of those fibers, a characteristic frequency appears when the scan is exactly centered on the fovea, indicating central fixation. Thus, by analyzing the generated frequencies in the obtained RBS signal binocularly, the precision of eye alignment can be measured.

To bypass the deleterious effects of corneal birefringence in RBS, the screener incorporates a spinning half-wave plate (HWP) in combination with a fixed double-pass retarder. Both wave plates modulate the RBS signal such that a theoretical improvement of about 3.86 times in RBS signal strength is achieved for a representative data set of human eyes, using computer modeling. Combined with a technique for focus detection in a single handheld device, this computer-modeloptimized PVS design promises to provide effective and appropriate screening instrumentation to automatically identify infants at risk for amblyopia.

For more information, contact the inventor at This email address is being protected from spambots. You need JavaScript enabled to view it..

A Camera for Nuclear Radiation Inside a Magnetic Resonance System

A new camera for spectroscopic imaging of nuclear radiation (gamma radiation) operates in very strong magnetic fields of more than 10 Tesla. The camera can be used inside a magnetic resonance imaging (MRI) system for the simultaneous acquisition of nuclear radiation and magnetic resonance images. The camera consists of identical radiation imaging modules and a multi-pinhole collimator. The system can be inserted into MRI systems and allows one to accurately co-register nuclear and radio images in space and time. The camera is based on the semiconductor material cadmium zinc telluride (CZT), which is almost insensitive to magnetic fields. Tomographic images can be acquired without moving the camera or the patient.

This surgical instrument compresses or distracts the distance between two pedicle screws in order to get proper placement along the connecting rod, and thereby achieve ideal vertebra spacing. A small male collet at the end of the instrument snaps into a mating female feature on a connecting rod. A Nitinol wire is actuated through the internal diameter of the collet, preventing it from disengaging. This firmly affixes the instrument to the rod axially, while preventing rotation through use of keying features. With one end of the connecting rod held in place at the far-side pedicle screw, the near-side pedicle screw is adjusted forward or backward along the rod using a hook on the end of the instrument. The hook has a rounded end to push (compress) on a pedicle screw delivery tube. Alternatively, the hook can pull (distract) on the same tube.

This article first appeared in the April, 2009 issue of NASA Tech Briefs Magazine.

Can We Trust A.I.? Modeling Tool Quantifies How Much a Machine Doesn't Know

Standardization for Automated-Vehicle Testing and Simulation

Using the IoT for Predictive Maintenance

Liquid-Repelling Substance Works on All Surfaces

Fiber Optic Oxygen Sensors — How Do They Work?